Revolution Porsche are delighted to announce that we now offer a full repair and upgrade service for Porsche 996 and 997 Turbo spoilers, using the world renowned P-Speed system. We are the official UK partner to P-Speed. 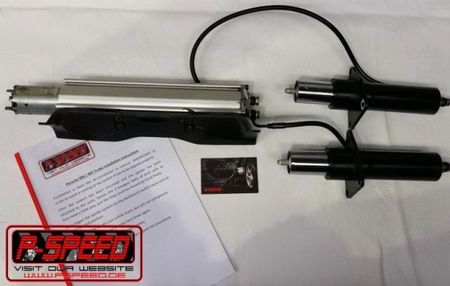 Leaks from the factory-fitted electro-hydraulic spoiler system in those models has proved to be an issue for many owners and replacing it with like-for-like components is an expensive business.

Choose the P-Speed solution instead and your Porsche’s spoiler system will be refurbished to include a specially-designed mechanism that removes the known weakness in the original system, while also restoring full functionality.

Even better, the P-Speed system is a fraction of the cost of replacing the original and much more reliable in the long term.

The electro-hydraulic spoiler system in the 996 and 997 Turbos works automatically, with higher speeds triggering a pair of hydraulic cylinders to raise the spoiler and then lower it again when the speed drops.

Unfortunately, those hydraulic cylinders are prone to leaks and a resultant loss of hydraulic fluid. This gradually affects the operation of the spoiler and it will eventually stop working.

Although the most obvious solution would appear to be to replace the cylinders or the whole system, this is an expensive option and comes with the risk of a repeat failure, as the issue is caused by a flaw in the original design. Some garages offer a fixed spoiler solution to replace the electro-hydraulic one, but this means accepting reduced performance.

Our favoured option for repairing your Porsche 996 or 997 Turbo’s spoiler system is the P-Speed solution, which we believe is both the most effective and best value for money choice.

What is the P-Speed solution for 996 and 997 Turbo spoiler systems?

The P-Speed solution is a combined repair and upgrade that will not only return your car’s electro-hydraulic spoiler system to full working order, but also guard against a repeat failure.

Rather than simply replacing the cylinder components on a like-for-like basis, P-Speed have redesigned the inner set-up of the cylinders to make it more robust and prevent leaks.

Your Porsche’s existing spoiler system is removed, disassembled and inspected to identify the precise nature and extent of the problem.

It is then refurbished using a better designed mechanism and higher quality parts than were in the factory fitted version. Along with the P-Speed developed inner cylinder mechanism, the upgrade includes new special o-rings and new copper seals.

The upgraded systems are then thoroughly tested at 120% of the stress of normal conditions to ensure reliability and performance (see the video below for more on how the systems are tested).

Once the system has passed the tests it will be refitted to your car and you can be confident that the hydraulic system will be leak-free for the long-term and that the spoiler’s function will be as good as new.

Revolution Porsche are the approved UK reseller of the P-Speed solution and can manage the whole process for you, including removing the spoiler system, dispatching it to the P-Speed technical team in Germany for refurbishment and refitting it on its return.

We also offer an express turnaround service should you not wish for your car to be off the road for more time than necessary.

Prices are as follows :-

£925 +VAT to remove, refurbish and refit including return postage within the UK (takes approx 5 working days)

£1025 +VAT for same day turn around if in our workshop or next day delivery once we've received yours.

Contact Revolution Porsche on 0113 468 6020 or via the website for more information about or to request a quote for a P-Speed spoiler upgrade for your Porsche 996 or 997 Turbo.